Green Team Leader: We Can Build on That! 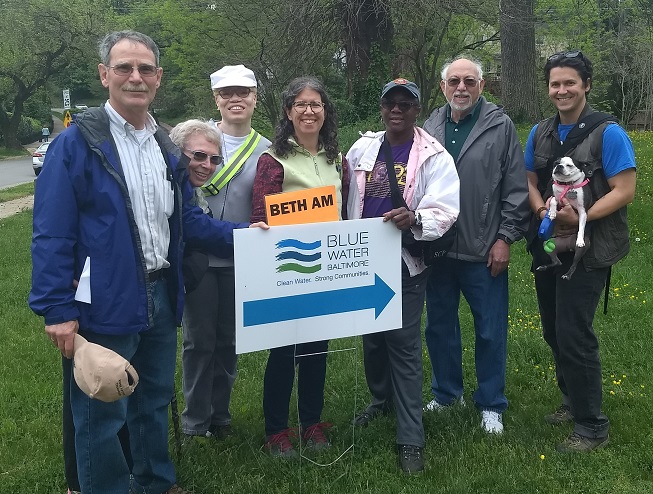 Stuart Stainman hasn’t let the COVID pandemic deter him from leading his green team to organize widely attended environmental events and actions from members of Beth Am Synagogue and beyond! (Stu is on the left of photo, together with others from his green team, Mt. Lebanon Baptist Church and Blue Water Baltimore.)

When asked “What motivated you to begin your care for the environment?” Stu responded: “It has evolved over time- I’ve been trying to push environmental issues in my synagogue for over a decade. I remember in about 2006- Rabbi Nina Cardin [former IPC Board President] started organizing congregations and asking for a covenant of commitment. Our synagogue has always been active on social issues. I always thought there  there should be an environmental component, so I tried to keep that as a visible issue within my synagogue.”

Stu has been an active advocate for the cleanup of the Chesapeake Bay for almost two decades. He followed the EPA implementation plans which included a public engagement component. Stu thought “there was always a dormant potential with religious institutions. I always felt that the state and EPA should work with the religious institutions to develop a core advocacy in the general public. So when IPC came along I thought this is exactly what I’ve been talking about all these years! There were a number of people who felt similarly about the environment so I stepped in.” Since then Beth Am Synagogue is one of the congregations which signed IPC’S Partner Congregation Pledge.

Stu has been so successful as a green team leader as he is able  to tap the skills and interests of those within his green team and faith community.  When issues or actions are raised he enthusiastically proclaims, “We can build on that – other people would be interested in that!” Stu was aware that there were many people interested in where to find resources to access solar energy so he contacted Baltimore Civic Works in collaboration with Interfaith Power & Light to organize a webinar. Originally intended only for his synagogue, it became an event widely attended by others throughout Baltimore because “I made the ‘mistake’ of letting Bonnie Sorak [IPC’s Outreach Coordinator] know, so it was she who suggested it be put in the IPC news. And that's how things happen!”  You can listen to Stu share his story about how he organized this event (and a virtual Earth Day event) on the recording of our Learning Lab webinar “Keeping Your Green Team Active During COVID.”

“At one of our meetings we talked about trees. There’s decent tree coverage in our congregation’s neighborhood, but there is a need for proper tree pruning and removal of invasives, so our team decided that rather than planting more trees we would go around pruning and removing invasives.” Stu went to the local neighborhood association and let them know their green team (accompanied by a Master Gardener) was available to provide this service. The response was overwhelmingly positive and through this project “our synagogue earned a lot of good will!”

On multiple levels Stu’s leadership and the work of his green team illustrate: following the enthusiasm and interests of your members, channeling the skills of people within your congregation and finding ways to connect with the wider community to serve their needs and the healing of Creation. If you’d like to learn more about how to build or strengthen a green team at your congregation sign up for one of our future Faithful Green Team Trainings!

If your congregation has not yet done so, please sign the IPC Partner Congregation Pledge.

Go forth and do likewise!

Tweet
Lent Reflection
Green Team Leader: We Can Build on That!
People of Faith, Protecting the Chesapeake.