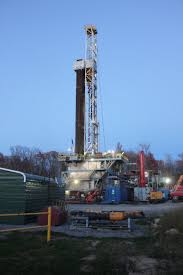 Hydraulic Fracturing (fracking) as a method for extracting natural gas from shale rock formations is controversial. It affects the Chesapeake Bay Watershed in that the Marcellus Shale formation, which is rich in sequestered gas, overlaps with the northern and western parts of the watershed in New York State, Pennsylvania and Maryland. Fracking is banned in New York State and permitted in Pennsylvania. Approval in Maryland, where extraction companies would hope to develop new sites, has been withheld to date with a moratorium. The environmental arguments against this process, apart from the harm to local infrastructure and impact on the rural communities involved, mostly are concerned with the use of large volumes of water, and polluted discharges into streams.

The fracking process relies on injecting water, sand and chemicals under high pressure into the shale formation. Some of the water remains below ground and is thus lost to the natural water cycle. Much of the water returns to the surface along with the gas and is contaminated with the industrial chemicals that are integral to the process. The risk of contaminating groundwater and streams is thus extremely high, and for this reason environmental organizations are opposed to it.

The University of Maryland released in August 2014 the findings of a study of the public health implications of fracking, if it was to be permitted in Maryland.  You can find links to the full report and scientific comments here.

This issue is closely monitored by the Maryland Environmental Health Network.

For more information, you may wish to visit:

A two-year moratorium on gas drilling in Maryland is due to expire in 2017, which means that the state legislature must take action in winter 2017, or else permits for gas drilling will likely be issued for sites in Western Maryland. Read more about legislative actions on our Advocacy page.